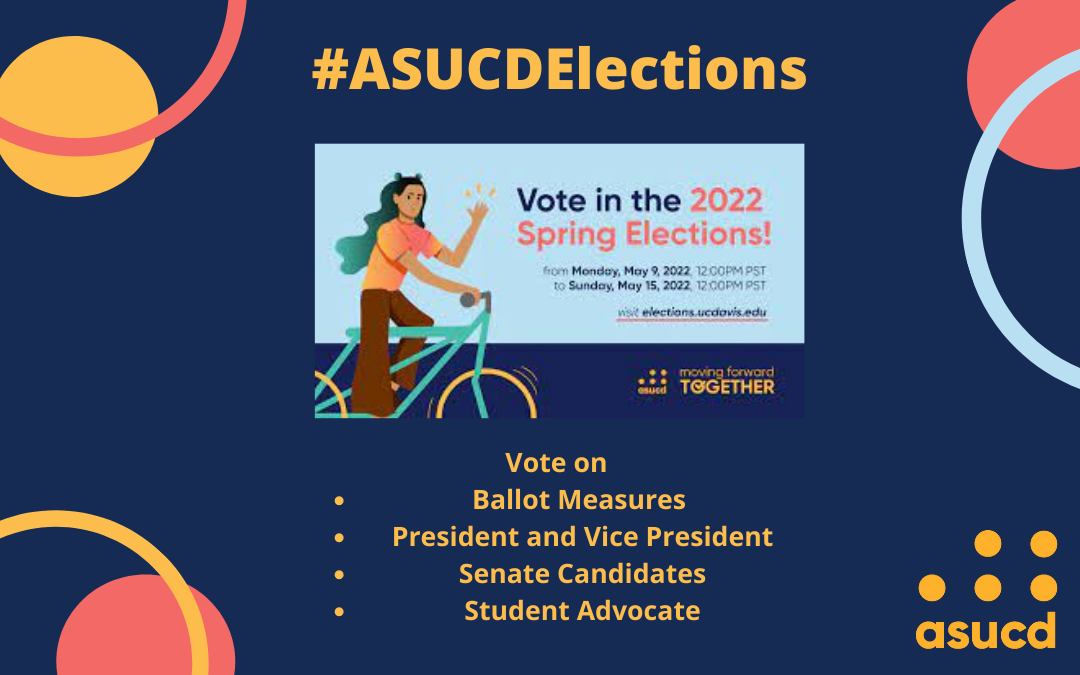 The Spring 2022 ASUCD elections are up and running on the ASUCD Elections website. Voting opened on May 9 at 12 p.m. and will close on May 15 at 12 p.m. With so many important races and issues on the ballot, this election will be remembered forever in UC Davis history. And it’s precisely because of the massive implications that can result from this election that YOU should vote.

This blog post will give you a run down of what to expect on the Spring 2022 ballot.

For the candidates’ side of the election…

And while the candidates for the executive branch and student advocate will win by default, the importance of voting for their positions in this election cannot be understated. These candidates’ mandates to represent the student body hinge entirely on the number of people who cast a vote for them. Even if their positions are uncontested, if you support them, it’s important for their perceived legitimacy that they get your vote.

There are three ballot measures up for a vote in this election.

One measure is titled…

Dubbing themselves a “GRASSroots MOOvement,” the coordinators of this measure are aiming to change the school mascot to a cow.

This is not the first time UC Davis students voted in a referendum to change the school mascot to a cow – that happened in 1993. However, lacking administrative and alumni support led to the matter fizzling out.

Will this time be any different? If this ballot measure passes with 60% of the voting pool voting in favor of changing the mascot, then we will find out.

The other ballot measures are titled…

These measures have gained a wide amount of publicity and are being closely watched by students, alums, university leaders, and the wider public. To be sure, UC Davis athletic student fees are some of the highest in the nation among publicly funded universities so the public scrutiny is reasonably expected.

Just four days before the election, a majority of the ASUCD Senate voted to place CA#76 onto the ballot, also known as the Democracy in Recalls Increased and Preserved (DRIP) Amendment. For context, current ASUCD policy makes it so that any elected position that becomes vacant will be filled via interim appointment. That means other ASUCD leaders will conduct interviews to find a replacement. If passed, the DRIP Amendment would change the recall process so that voters can also vote on a candidate to replace the official if the recall is successful.

From important elected office races to high stakes ballot measures, this election will be one for the history books. And the course of UC Davis history is in YOUR hands. Be sure to vote!